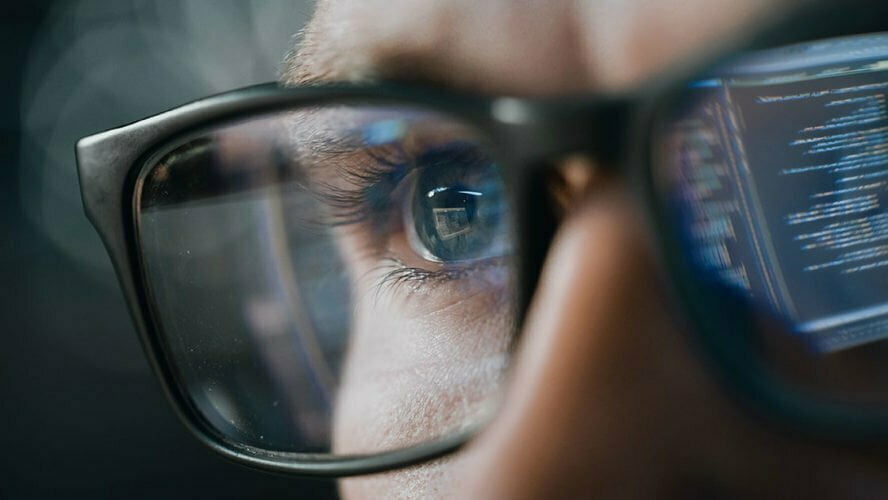 How are our screens impacting our eye health?

The eyes are the window to the world. From the second you wake up, to the moment you fall asleep, your eyes are constantly working to take in and process all the information in your environment.

Life is very different now than it was just a few decades ago, and our daily environments have dramatically changed. We have technology to thank for that. Because of the fast-paced nature of the current technological revolution, our bodies are more vulnerable now than ever before.

The human body evolves over many years and hasn’t had time to keep up with the rapid environmental changes. New forms of man-made toxins are constantly putting the body under stress and in defense mode. And the eyes are on the frontline of battle.

Eye health is impacted by your environment, as well as hydration and nutrition, sleep, genetics, cardiovascular health, eye trauma, and aging. With eyes being the closest neural pathway to the brain, eye health and brain health are often mutually impacted, especially with age.

Nutrition, like always, is critical in maintaining healthy eyes. A lack of proper and sufficient nutrients–including omega 3s, antioxidants, and carotenoids to name a few–will lead to poorer eyesight down the road and increases the potential for serious eye issues. Staying properly hydrated will keep the eyes lubricated, and help to protect from bacteria and stray particles that enter the eye.

Sleep is critical for eye health because it is the only time of day when the eyes are not being put to work. Drifting off into the blackness of sleep allows the eyes to rest and recover after the daily strain. Without adequate amounts of sleep, eyes become overworked, leading to eye strain, blood vessel issues, and dry eye.

An unfortunate side effect of aging is its impact on eye health–statistics show there is an increase in vision impairments with age. Nearly 12 million Americans aged 40 years and older are plagued with some form of vision impairment. Glaucoma, dry eyes, macular degeneration, cataracts, and presbyopia all are common age-related eye problems.

And among all that, technology enters the game to put even more stress on our eyes. Keep reading to learn how the digital age is affecting our eyes.

ROYGBIV anyone? Blue light is one of the colors in the spectrum, falling on the end with shorter wavelengths.

Natural blue light comes from the sun, answering the age-old question: why is the sky blue? Blue light helps regulate your body’s circadian rhythm because it stimulates the brain, making us feel awake. Since the time of cavemen, humans have followed a wake-sleep cycle that is triggered by the sun. When it’s time for the body to sleep, melatonin is produced, which induces sleep. (Side note: sunlight also plays an important role in the synthesization of vitamin D, a key nutrient for your immune system and cellular resiliency).

The dark side to blue light is that there is simply too much of it. The ubiquitous nature of screens has accompanied the rapid explosion of technology over the last decade. You’ll be reading this blog from a screen–it’s a safe bet to say there’s at least one other screen in your vicinity (phone, television, laptop, iPad). Humans are being exposed to levels of blue lights that simply didn’t exist until recent times.

Blue light is harmful because of where it falls on the visible light spectrum. Because of the shorter wavelengths, it has more energy. Blue light scatters more than other light, making it harder for the eyes to focus on it.

Excess exposure to blue light, artificial light, and LED screens affects all parts of the eye, from the lens to the retina. It has been linked to many health issues including eye strain, eye fatigue, headaches, inflammation, retinal damage, and dryness. You subconsciously blink less when you are looking at screens, causing dry eyes. (Another modern convenience, air conditioning and central heating, only exacerbates this issue by creating dry air). 60% of Americans experience symptoms of digital eye strain due to blue light.

Studies have found blue light to induce photoreceptor damage, as well as light-induced damage to the retina, both from short- and long-term exposure. The severity of damage caused by light depends on the time of day (which is why screens at night are a major red flag!). In test subject rats, the animals were three to four times more at risk for light damage at night than during daytime hours.

EMF radiation is an invisible toxin. In electronic devices, electric currents pass through circuits creating an electromagnetic field. As a form of radiation, it is harmful to all living things.

In humans, eyes are more sensitive to EMF radiation for two reasons. Firstly, eyes are directly exposed to the environment unlike other organs. There is no barrier made up of skin, bones, or muscle between the eyes and environmental toxins.

Secondly, your eyes are responsible for processing and translating light into information the brain can process. Like we said before, eyes are the closest neural pathway to the brain! Visible light falls on the electromagnetic spectrum–as a result, eyes are naturally attuned to be more sensitive to electromagnetic radiation. Excessive levels of EMF radiation can put the eyes into overdrive and under stress, which can be detrimental to eye and brain health.

Research has shown EMF radiation to affect all parts of the eye. EMF radiation at levels emitted from just cell phones caused plasma protein alterations and changes to eye pathology in baby mice. Exposure to radiation over a certain threshold and for a prolonged period is damaging to the eyes and can induce cataracts.

Exposure to EMF radiation is linked to premature aging of the eye, lens damage, and damage on a cellular level.

● Limit the amount of screen time, especially at night. As we learned, blue light also affects your body’s circadian rhythm by triggering melatonin production. The National Sleep Foundation recommends you stop looking at screens at least 30 minutes before bedtime to help you have a more restful sleep.
● Wear blue light glasses when looking at screens. Some glasses, such as DefenderShield Blue Light Blocking Glasses, can block up to 99% of blue light.
● Set-up night shift on your devices. This setting automatically changes the display colors to the warmer end of the spectrum, specifically at night, adjusting the hues of the screen to decrease the amount of blue light.
● Follow the 20-20-20 rule. Look away from screens every 20 mins and focus on something that’s 20 feet away for at least 20 seconds. This helps to reduce the strain put on your eyes while looking at a screen and gives your eyes a time to reset.
● Maintain a healthy and robust diet. Proper nutrition is essential for eye health. A lack of certain vitamins and minerals–specifically vitamin C, E, zinc, and lutein–can be harmful to your eyes and can exaggerate symptoms. Consume an array of fruits and vegetables to not only see better eye health but help contribute to your overall health and wellbeing. Antioxidants are also a key component of your diet to fight against the damaging oxidative stress and free radicals that are triggered by blue light and EMF radiation.